“This is an exceptionally competitive and prestigious show, and it’s a huge honor just to have your work accepted, let alone win,” said TAI Lecturer Mark Allen. “This year, we had more entries accepted than ever before and won more awards than ever before. We’re incredibly proud of these students!”

The NSSC began in 1957 as a one-day regional competition to give North Texas communication arts students the opportunity to showcase their work, and in the 1970s became the Dallas Society of Visual Communications Student Show. While there were many national competitions for established industry professionals, there were few competitions for up-and-coming students. In response, the DSVC Student Show transformed from a small, regional contest into a three-day national competition and conference in 2004. Now known as the NSSC, it is the largest  advertising and design competition for students in the country, offering over $20,000 in cash prizes and scholarship awards.

The three-day event typically features keynote speakers, breakout sessions and portfolio reviews followed by a dinner reception and awards gala. However, due to the coronavirus, the conference was canceled and the gala was moved online this year.

Allen participated in the DSVC Student Show when he was a student in the late ’90s.  He has taught in the Temerlin Advertising Institute since 2003, and was first brought on to help start the creative program for art directors and copywriters.

“I knew the NSSC was a great place for us to get our name out there and to get our students recognized,” said Allen. “I started encouraging students to compete back when I first came to SMU in 2003, and we’ve been participating ever since. The DSVC also holds a professional show around the same time every year; my fellow advertising colleague Professor Willie Baronet and I have both participated and have been fortunate enough to be recognized for some of the work we’ve done as art directors and designers over the years. It might be a ‘regional’ show but it’s got a national reputation.”

Allen played an influential role in the competition itself this past year.

He also influences his students to consider participating.

“I am the cheerleader who is always telling students to enter their work,” he said, noting that getting one’s work and name recognized with the best of the industry can help propel careers. “I also help them figure out strategically what the best categories are for them to enter. It’s easy if you have a commercial – you put it in the commercial category. But if you have an integrated campaign that has several different pieces, it can be tougher to decide where they should go.  Once we do, the students take it from there.

“The work primarily comes out of the Creative Specialization classes that Willie and I teach like Concepting, Portfolio and Advanced Portfolio, but more and more we’re also getting work into the show from students in our Graphic Design minor,” he said.

Allen said that while he was thrilled with his students’ performance at the competition, the feeling was bittersweet knowing he would soon say goodbye to his graduating seniors.

“I’m just really proud of our students for all kinds of reasons,” he said. “Our program is at a really sweet spot where we’ve got a lot of energy and talent; we’ve got a truly exceptional group all-around right now. You’d figure that we’d get used to this by now, but every year we miss our students when we have to send them off.”

The SMU winning entries are as follows:

Kell Klopp and Allie Hartman’s Grammarly campaign also won Best Copywriting in TAI’s Portfolio Night & Exhibition. In addition, it is featured on Ads of the World, an advertising archive and community that showcases creative advertising from around the world.

“We thought a lot about when it is necessary to use Grammarly and found that the truth is Grammarly is all around the easiest way to be the best you can be,” said Klopp and Hartman in a joint statement. “We wanted our ads to show how simple of an app it is while highlighting the importance of using Grammarly.

“It’s not easy being an advertising student, and to be able to have our work awarded like this means a lot to us. We work hard and try our best, and we couldn’t do such amazing work without our outstanding professors,” the duo said.

The NSSC was the first competition in which Isaac Cordova has entered his Smile Reversal series. 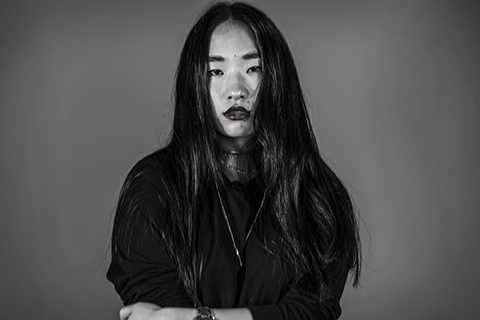 “This photographic series explores the emotions we feel behind closed doors, going beyond the mask of ‘picture-perfectism,’” said Cordova. “On a path to become my most authentic self, this series came to life as I became more and more uncomfortable with how people wear a ‘mask’ meant to hide how they really feel inside. There is nothing more beautiful than a genuine expression.

“Winning the overall photography award at the NSSC is beyond rewarding. I’m proud to represent SMU and I take it as a sign to never stop creating!” Cordova said.

Altogether, nine SMU entries were accepted into this year’s competition. The full list of accepted work is as follows:

Congratulations to TAI Students Isaac Cordova and Will Sutter for achieving the TOP creative award in the Texas Central Bullet Train Short Film Competition! And thank you to everyone who voted them to first place, we are proud! I am a junior majoring in Advertising with a specialization in Digital Media Strategy with minors in Graphic Design and Spanish. I’m also participating in the 4+1 SMU Advertising program that allows me to take undergraduate and graduate classes simultaneously in order to obtain bachelor’s and master’s advertising degrees in five years. During the 2018-2019 academic year, I received the following honors:

I applied for these scholarships, internships, and honors societies at the end of the fall semester and was extremely nervous during the application processes because of the programs’ prestige and competitiveness. Managing deadlines, requesting letters of recommendation from professors and mentors, staying on top of daily homework assignments, and studying for tests was no easy feat. Nevertheless, I was determined to submit my applications, in case I wasn’t accepted as a junior, to refine my skills and experiences before becoming a senior.

When I was first notified that I received the 2019 Washington Media Scholars Foundation Media Fellows Scholarship, I was shocked! I couldn’t believe it until I spoke with a representative of the foundation who told me that my application was impressive and well-received. And while this was surprising, receiving two other scholarships–the 2019 Dallas Area Alliance for Women in Media Irene Runnels-Paula McStay College Scholarship and Pi Beta Phi Foundation at SMU Scholarship–was even more overwhelming. Additionally, qualifying for the 2019 AAF Vance and Betty Lee Stickell Internship and the 4A’s Multicultural Advertising Internship Program were both amazing opportunities, though I ultimately decided to participate in the 4A’s Multicultural Advertising Internship Program because of its focus to promote inclusion and diversity in the advertising industry. I am very passionate about this. My induction into the SMU Decima Chapter of Mortar Board National Honors Society is a privilege in itself and I am grateful to be a part of this organization that recognizes leadership, community service, and scholarship among students. As a 2019 MAIP Fellow, I will work at Digitas in Boston as a Media Buying and Planning intern this upcoming summer and am extremely excited.

SMU Advertising has provided me with amazing opportunities to network with professionals and connect with my peers as we prepare for future careers in the advertising industry. I hope to help foster a world where minorities are celebrated and accurately represented. I believe that I will make a difference in the industry, as a voice for minorities, and receiving these honors is just the beginning.

After a seven-year hiatus, CMYK Magazine is back in publication and better than ever with its first fully digital issue featuring nine Temerlin Advertising students as award winners. This means that more than half of the winners in the Advertising category are TAI students. Congratulations! HomeAdvisor / “Bridging the gap between you and home repair.”
Anna Rose Corell, AD/CW Now that the campaign for Ocean Spray has been created, SMU-TAI’s Ad Team has begun to get their final presentation ready for the AAF District 10 competition in Corpus Christi, TX. The members that were selected to present the team’s work to a panel of judges shared their expectations for the National Student Advertising Competition (NSAC).

“This is my second year on Ad Team, so it feels good to know what to expect going into the competition. I think that our campaign strategy is really strong, and we have an incredible team of presenters (if I do say so myself) so I’m excited to see how all of our hard work is going to pay off!”

“We have all worked extremely hard for this moment, so I think it will be very satisfying to see all our work come together in the final presentation. Everyone on the team contributed so much to this campaign and we are all very excited to see it through. “

“I cannot wait for all of our hard work to come to fruition. Amy and SJ have been great leaders throughout this process, leading the charge in both coordination and execution. Professor Benson has also been extremely helpful in balancing a hands-off approach with corrective guiding. While there may just be four of us presenting, it took a small army for everything to come together. I hope to win and eventually move on to Chicago, but if not at least we gained a lot of experience and felt the real pressures of a hypothetical campaign.”

Sara Jane Stephens – Advertising major on the Strategic Brand Management track with a minor in Spanish.

“I’m extremely excited for the upcoming NSAC competition in Corpus Christi. Amy, Harrison, Alex and I have a lot of energy, charisma, and chemistry on stage, which makes our presentation memorable. Not to mention, our campaign strategy is really thorough and definitely makes us a strong contender in the competition. We’ve put in a lot of long nights and hard work into this, and I know that will be clear during the presentation!”

The team will present their integrated campaign at the AAF District 10 Convention, ADVENTION, on April 15, in Corpus Christi, Texas. The winning team(s) from each district will advance to the 2018 semi-finals, which will take place over two days, on May 2–3, 2018. Between 16 and 20 teams will compete for one of eight spots in the finals. Eight finalists will then compete for the national title at the annual ADMERICA conference, which will take place in Chicago, Illinois in early June.

TAI is confident in Ad Team’s effort, abilities and talent. We wish them the best of luck at the NSAC district competition this weekend!

For more information about NSAC please visit the competition website.