Thousands of students, faculty and townspeople showed up to campus Monday, Aug. 21 to observe the Great American Solar Eclipse at a viewing hosted by Dedman College of Humanities and Sciences and the SMU Department of Physics.

The festive event coincided with the kick-off of SMU’s Fall Semester and included Solar Eclipse Cookies served while viewing the rare astronomical phenomenon.

“What a great first day of the semester and terrific event to bring everyone together with the help of Dedman College scientists,” said Dedman Dean Thomas DiPiero. “And the eclipse cookies weren’t bad, either.”

Physics faculty provided indirect methods for observing the eclipse, including a telescope with a viewing cone on the steps of historic Dallas Hall, a projection of the eclipse onto a screen into Dallas Hall, and a variety of homemade hand-held devices.

Outside on the steps of Dallas Hall, Associate Professor Stephen Sekula manned his home-built viewing tunnel attached to a telescope for people to indirectly view the eclipse.

“I was overwhelmed by the incredible response of the students, faculty and community,” Sekula said. “The people who flocked to Dallas Hall were energized and engaged. It moved me that they were so interested in — and, in some cases, had their perspective on the universe altered by — a partial eclipse of the sun by the moon.”

A team of Physics Department faculty assembled components to use a mirror to project the eclipse from a telescope on the steps of Dallas Hall into the rotunda onto a screen hanging from the second-floor balcony.

Adjunct Professor John Cotton built the mount for the mirror — with a spare, just in case — and Professor and Department Chairman Ryszard Stroynowski and Sekula arranged the tripod setup and tested the equipment.

Stroynowski also projected an illustration of the Earth, the moon and the sun onto the wall of the rotunda to help people visualize movement and location of those cosmic bodies during the solar eclipse.

Professor Fred Olness handed out cardboard projectors and showed people how to use them to indirectly view the eclipse.

“The turn-out was fantastic,” Olness said. “Many families with children participated, and we distributed cardboard with pinholes so they could project the eclipse onto the sidewalk. It was rewarding that they were enthused by the science.”

Stroynowski, Sekula and others at the viewing event were interviewed by CBS 11 TV journalist Robert Flagg.

Physics Professor Thomas Coan and Guillermo Vasquez, SMU Linux and research computing support specialist, put together a sequence of photos they took during the day from Fondren Science Building.

“The experience of bringing faculty, students and even some out-of-campus community members together by sharing goggles, cameras, and now pictures of one of the great natural events, was extremely gratifying,” Vasquez said.

Sekula said the enthusiastic response from the public is driving plans to prepare for the next event of this kind. 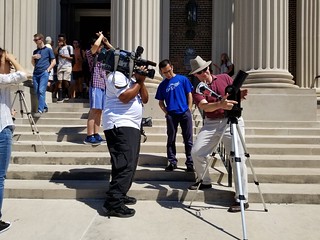 Dr. Stephen Sekula from the SMU Physics Department talks with Dr. David Meltzer and Dedman Dean Thomas DiPiero on the steps of Dallas Hall. Sekula manned a telescope outfitted with his homemade indirect viewing tunnel for the public to use during the Great American Solar Eclipse 2017. (Margaret Allen/SMU) Dr. Ryszard Stroynowski from the SMU Physics Department projected onto the wall of Dallas Hall an illustration of how the moon causes a solar eclipse. (Margaret Allen/SMU) Dr. Fred Olness from the SMU Physics Department handed out cardboard projectors for viewing the eclipse and showed people how to use them. (Renee McDonald/SMU)