They used an X-ray gun … and dates were calculated based on the characteristics of the radioactive isotope thorium-230 and its radioactive parent uranium-234.

Science journalist Cheyenne MacDonald covered the research discovery of SMU archaeologist Mark D. McCoy. New dating on the stone buildings of the ancient monumental city of Nan Madol suggests the ancient coral reef capital in the Pacific Ocean was the earliest among the islands to be ruled by a single chief, McCoy found.

The article, “The first king: 1200 AD tomb reveals ancient city invented new kind of society and was the first of the Pacific Islands to be ruled by a single chief,” published Oct. 19, 2016.

McCoy led the discovery team. The discovery was uncovered as part of a National Geographic expedition to study the monumental tomb said to belong to the first chief of the island of Pohnpei. McCoy deployed uranium series dating to determine that when the tomb was built it was one-of-a-kind, making it the first monumental scaled burial site on the remote islands of the Pacific.

By Cheyenne MacDonald
DailyMail.com
A massive stone tomb buried beneath foliage in the long-abandoned city Nan Madol may have been built for the first chief of the island of Pohnpei.

Through uranium series dating, researchers have determined that the structure began construction by 1180 CE and housed the chief’s body just 20 years later, pushing back the establishment of a powerful dynasty more than 100 years earlier than previously thought.

The dynasty of Saudeleur chiefs ruled the island society for over 1,000 years, and the new find suggests this ancient city built atop a coral reef was the earliest of the Pacific Islands to be ruled by a single chief.

Nan Madol is the largest archaeological site in Micronesia, and researchers with a National Geographic expedition say this is the first burial site of such massive scale to be built on the Pacific Islands.

It was previously estimated that it was established in 1300 CE, but now, the team has found evidence that suggests this occurred much earlier, providing new insight on the transformation of societies into complex, hierarchical systems.

‘The kind of society that we live in today, it wasn’t born last year, or even 100 years ago,’ said lead archaeologist Mark D. McCoy, from Southern Methodist University in Dallas. 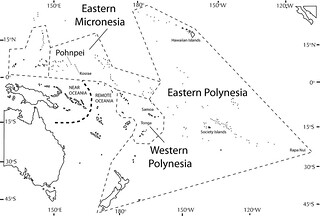