“Recurring cancers have ‘learned’ how to evade chemotherapy by pumping it out of the cancer cells so that only sub-therapeutic concentrations remain in the cell, making the drug useless.” — SMU biochemist Pia Vogel

Each semester, SMU biology professors Pia Vogel and John Wise welcome a handful of dedicated and curious students to their lab in the SMU Dedman Life Sciences building.

The SMU undergraduate students and Dallas-area high school students get hands-on experience working on cancer research in the combined SMU Department of Biological Sciences laboratories of Wise and Vogel.

The researchers and students are working to find ways to treat cancer patients whose cancer has either returned after initial chemotherapy or was initially hard to treat using chemotherapeutics. The research is funded in part by the National Institutes of Health. 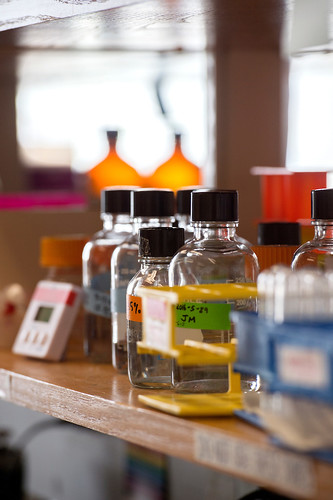 “Often, recurring cancers have ‘learned’ how to evade chemotherapy by pumping the therapeutic out of the cancer cells so that only sub-therapeutic concentrations remain in the cell, making the drug useless,” said Vogel, a professor and director of the SMU interdisciplinary research institute, the Center for Drug Discovery, Design and Delivery.

The pumps that do the work are proteins that span the cell membranes and use the biological fuel ATP to actively pump chemotherapeutics and other toxins out of the cells.

“We like to compare these proteins to biological sump pumps,” said Wise, associate professor.

Wise and Vogel use a combination of computational, biochemical and human cell-based techniques to find new drug-like compounds that inhibit the action of the pumps. If successful, the novel drugs — or derivatives of them — will be given to patients with therapy-resistant cancer together with the chemotherapeutic.

“Since our novel compounds block the pumps, the chemotherapeutic will remain in the cell and kill the cancer that had not been treatable previously,” Vogel said.

The researchers have discovered drug-like compounds that can be modified and developed into medicines that target the protein, called P-glycoprotein.

The SMU researchers discovered the compounds after virtually screening more than 10 million small drug-like compounds made publically available in digital form from the pharmacology database Zinc at the University of California, San Francisco.

Using SMU’s Maneframe high performance computer, Wise ran the compounds through a computer-generated model of the protein. The virtual model, designed and built by Wise, is the first computational microscope of its kind to simulate the actual behavior of P-glycoprotein in the human body, including interactions with drug-like compounds while taking on different shapes. The promising compounds were then tested in the lab.

A pharmaceutical hit compound, like those discovered by Vogel and her co-authors, is a compound that is a promising candidate for chemical modification so it can eventually be delivered to patients as a therapeutic drug. In the case reported here, the compounds were commercially available for testing. The timeline from drug discovery to development to clinical trials and approval can take a decade or more.

Some perform small research projects. Others have simply learned state-of-the-art techniques and “how science works” in the context of critical human health problems.

“High school student Robert Luo was interested in the computational side of our work, so he’s worked with senior SMU Ph.D. candidate James McCormick on trying to evaluate how strongly one of the therapy-sensitizing compounds we found potentially interacts with the pump protein at different proposed binding sites,” said Wise. “It is actually a significant project and will help with our research.”

The opportunities available for students to learn how science works using high performance computing, biochemistry and cell biology can be valuable even for those who won’t necessarily become practicing scientists, said Wise, citing as an example a recent SMU graduate who previously worked in the lab.

“Ketetha Olengue (SMU ’15) is a good example,” he said. “She is now in her second year at the Keck School of Medicine at the University of Southern California, where she is pursuing her M.D. degree in a novel program with USC Engineering.” — Margaret Allen, SMU

Students in the lab

Three Dallas high school students will have an amazing “What I did last summer” essay as they return to school this fall. Hockaday student Victoria Bennett and Highland Park High School students Shaffin Siddiqui and Robert Luo spent the summer investigating ways to fight recurrent cancer in the research lab of SMU biology professors Pia Vogel and John Wise.

Exposure to research aimed at tackling a critical problem in cancer research — the development of drugs to fight chemotherapy-resistant cancer, particularly prostate cancer — emphasized for students the value of the work, including attention to detail.

“Science discoveries take much longer than I thought,” said Bennett. “The focus is on accuracy not speed.”

“Science is not a one-minute explosion but something that requires lots of people working on lots of different parts of a problem,” said Siddiqui. “I feel a little small in the big picture of things.”

The students learned how to clone proteins and to determine the level of proteins in a solution, as well as to compile a simulation of a potential cancer-fighting drug for ManeFrame, the SMU high performance supercomputer.

“I liked working in computation because you get results quicker,” said Luo. “When I was in freshman science I asked my teacher a question. She told me she didn’t know and that scientists were studying it. That was the first time I realized teachers don’t know all the answers, there are still so many things we don’t know.”

Wise and Vogel welcome high school students into their lab each summer not for the work they produce, but for the opportunity to expose students to science.

“There are so many misconceptions of science,” said Vogel. “Most high school students really like it once they work in our lab. If we can interest just one student in science, it is worth it.” — Nancy George, SMU