Identification of Africa’s rodents provides important collaborating information on the ecology of the locales and on environmental change through time,” — Winkler

Rodents get a bad rap as vermin and pests because they seem to thrive everywhere. They have been one of the most common mammals in Africa for the past 50 million years.

From deserts to rainforests, rodents flourished in prehistoric Africa, making them a stable and plentiful source of food, says paleontologist Alisa J. Winkler, an expert on rodent and rabbit fossils. Now rodent fossils are proving their usefulness to scientists as they help shed light on human evolution.

Rodents can corroborate evidence from geology and plant and animal fossils about the ancient environments of our human ancestors and other prehistoric mammals, says Winkler, a research professor at Southern Methodist University.

“Rodents are often known in abundance, and there are many different kinds from a number of famous hominid and hominoid localities,” says Winkler. “Many paleoanthropologists are very interested in the faunal and ecological context in which our own species evolved.”

Rodents: World’s most abundant mammal — and Africa’s too
Rodents — rats, mice, squirrels, porcupines, gerbils and others — are the largest order of living mammals, constituting 42 percent of the total mammalian diversity worldwide. That’s according to data drawn from the research literature in an analysis by Winkler and her paleontology colleagues Christiane Denys, of the Museum National d’Histoire Naturelle in Paris, and D. Margaret Avery of the Iziko South African Museum in Cape Town.

Their review documents more than 130 formally named genera in “Fossil Rodents of Africa,” the first comprehensive summary and distribution analysis of Africa’s fossil rodents since 1978.

The analysis is a chapter in the new 1008-page scientific reference book “Cenozoic Mammals of Africa” (University of California Press, 2010), the first comprehensive scientific review of Africa’s fossil mammals in more than three decades. The book comprises 48 chapters by 64 experts, summarizing and interpreting the published fossil research to date of Africa’s mammals, tectonics, geography, climate and flora of the past 65 million years.

Rodents are human’s best friend?
Rodents have been around much longer than humans or human ancestors in Africa, with the earliest from northern Africa dating from about 50 million years ago. Today scientists are aware of 14 families of rodents in Africa.

Winkler cites locales where fossils of the sharp-toothed, gnawing creatures have been found relevant to our human ancestors:

Their fossils also have been found in other older Eastern Africa sites, where apes and humans have been linked to the monkey lineage.

“At many of these sites, identification of Africa’s rodents provides important collaborating information on the ecology of the locales and on environmental change through time,” the authors write.

Rodent diversity likely underestimated; more fossils than scientists
The diversity of ancient Africa’s rodents most likely has been underestimated, say the authors. Just how much isn’t known, though, because the quantity of rodent fossils being discovered far exceeds the handful of scientists who specialize in identifying and studying the specimens.

That diversity continues to expand. The last exhaustive analysis of Africa’s rodents was carried out by R. Lavocat in 1978. At that time scientists recorded 54 genera, 76 fewer than those documented by Winkler, Denys and Avery in their analysis.

Winkler and her colleagues summarize the distribution and ecology of existing rodent families, as well as the systematics, biochronology and paleobiogeography of rodent families in Africa’s fossil record. The diversity they document reflects “the wide variety of habitats present on the continent” and paints a picture of Africa’s paleoecology.

Given the huge rodent diversity in modern Africa, “it is likely that such an extensive fauna was also present in the past,” the scientists write.

Tremendous diversity reflects wide variety of habitats
An example of that relationship is the scaly-tailed flying squirrel, an exclusively African group of forest-dwelling rodents that are not related to true squirrels. They are well known from about 18 million to 20 million years ago in eastern Africa, Winkler says, suggesting the presence of closed habitats, such as forests. That corroborates other evidence of forests from fossil animals, plants and geology, she says.

“Although there are even older scaly-tailed flying squirrels known from the currently arid regions of northern Africa,” says Winkler, “they do not appear to have been gliders, as are most current forms, and the question of when members of the group first developed gliding locomotion still remains.”

Funding for “Cenozoic Mammals of Africa” came from the Swedish Research Council; the University of Michigan’s College of Literature, Science, and the Arts, and Museum of Paleontology; and the Regents of the University of California.

Winkler is in the Roy M. Huffington Department of Earth Sciences at SMU, and is also an assistant professor at the University of Texas Southwestern Medical Center, Dallas. — Margaret Allen 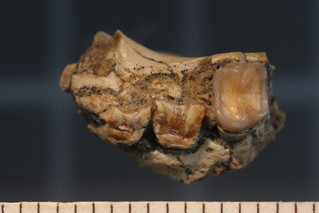