“Your worth is not defined by what anybody would pay you,” said Welter, who in 2015 became the first female coach in the NFL. “My value was priceless. The budget was $12, but I had to be willing to bet on myself.”

Welter advised women gathered for the 2017 Women Ambassadors Forum this week at Southern Methodist University to be good enough to get a foot in the door.

“The responsibility is once you’re in that room, you pull other people in with you,” she said.

The four-day conference geared toward empowering women in leadership kicked off Tuesday and includes 32 ambassadors from 19 countries. The women were chosen from almost 600 online applicants. They are people who have demonstrated leadership skills and a willingness to learn, said Ingrid Harb, founder and president of Women Ambassadors Forum.

“Most of all, we look for women [who] are ready to make a change,” Harb said. “Women that take initiative, women that aren’t scared of learning or failing [or scared] of taking a risk.” 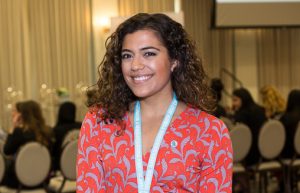 Harb first formed the global organization in 2015 when studying at Trinity University in San Antonio.

She recognized a need for a platform to foster female leadership, networking, and mentorship. Since then, it has expanded from her circle of friends to other universities in the state and internationally.

In its third year, the student-driven forum is making a stop in Dallas. This year’s theme, the “Ripple Effect,” is a metaphor for how these ambassadors may become strong leaders to create positive change and be impactful in their communities and professional fields.

“These women fight to come here, so it’s really powerful to see how — regardless of the obstacles — they’re willing to overcome them,” Harb said.

The forum’s co-chair Mirka Serrato, a marketing and management student at SMU, has been with the organization since its conception, crafting its branding and messaging.

The goal is to give ambassadors the opportunity to connect and engage with one another and to exchange ideas without discrimination or prejudice, Serrato said.

“All of these girls have incredible potential,” she said.

Ambassador Paula Manuel from Far Eastern University in Manila, Philippines, said the conference is giving her a chance to be a “global change maker” and to learn from people she would not have met otherwise.

Harb, with the help of her team, brought the event to Dallas because it had a lot of support from local companies and professionals — especially those at SMU, she said.

The region is a hub of businesses, institutions, and associations, said the forum’s other co-chair Gloria Gutierrez, a recent SMU graduate. The school assisted the forum in making connections with different organizations and companies in the area and networking leaders across all disciplines and fields. READ MORE