Paper Trails: The U.S. Post and the Making of the American West 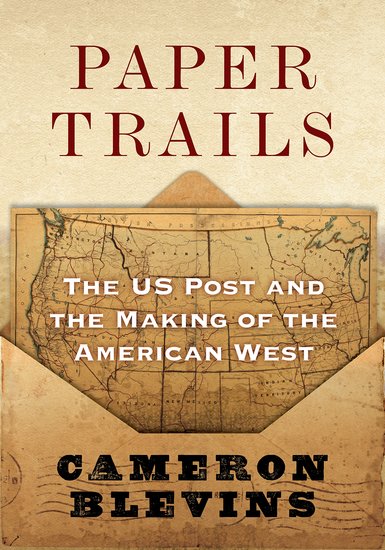 A groundbreaking history of how the U.S. Post made the nineteenth-century American West.

Join us as historian Cameron Blevins discusses his latest book, Paper Trails: The U.S. Post and the Making of the American West, on the pivotal role of the U.S. postal service during the country’s expansion west.

There were five times as many post offices in the United States in 1899 than there are McDonald’s restaurants today. During an era of supposedly limited federal government, the United States operated the most expansive national postal system in the world.

In this cutting-edge interpretation of the late nineteenth-century United States, Cameron Blevins argues that the U.S. Post wove together two of the era’s defining projects: western expansion and the growth of state power. Between the 1860s and the early 1900s, the western United States underwent a truly dramatic reorganization of people, land, capital, and resources. It had taken Anglo-Americans the better part of two hundred years to occupy the eastern half of the continent, yet they occupied the West within a single generation. As millions of settlers moved into the region, they relied on letters and newspapers, magazines and pamphlets, petitions and money orders to stay connected to the wider world.

Paper Trails maps the spread of the U.S. Post using a dataset of more than 100,000 post offices, revealing a new picture of the federal government in the West. The western postal network bore little resemblance to the civil service bureaucracies typically associated with government institutions. Instead, the U.S. Post grafted public mail service onto private businesses, contracting with stagecoach companies to carry the mail and paying local merchants to distribute letters from their stores. These arrangements allowed the US Post to rapidly spin out a vast and ephemeral web of postal infrastructure to thousands of distant places.

The postal network’s sprawling geography and localized operations forces a reconsideration of the American state, its history, and the ways in which it exercised power.

This event is cosponsored with the Clements Center for Southwest Studies.

Cameron Blevins is associate professor in the history department at the University of Colorado Denver, and is a respected leader in the field of digital history.

This event is currently intended to be held in-person at McCord Auditorium, Dallas Hall. However, this may be subject to change as the COVID-19 crisis continues. Any updates will be announced here and across CPH’s social media.

Chatiner, Isaac. “The Importance of the Post Office to American Democracy.” The New Yorker Magazine. https://www.newyorker.com/news/q-and-a/the-importance-of-the-post-office-to-american-democracy

Upholt, Boyce. “The tumultuous history of the U.S. Postal Service—and its constant fight for survival.” National Geographic Magazine, 18 May 2020. https://www.nationalgeographic.com/history/article/tumultuous-history-united-states-postal-service-constant-fight-survival